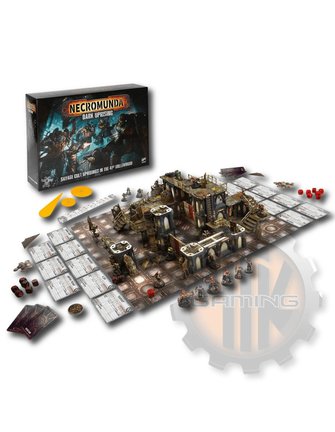 Throw off the yoke of Imperial rule, or violently put down brutal rebellions
Includes two gangs and a huge amount of Zone Mortalis terrain
Contains all you need to play games of Necromunda
£140.00 £175.00
Share

Like countless other worlds of the Imperium, Necromunda suffers from the curse of insurrection. Even though the Enforcers stamp out rebellion wherever they find it, there is no shortage of those willing to embrace the malevolent power of the Dark Gods. Now, the Corpse Grinder Cults prepare to launch a full-blown rebellion in the name of Khorne. Can you stop the dark uprising or will you join it?

Jump into the world of skirmish wargaming with Necromunda: Dark Uprising. Choose your gang and fight thrilling, fast-paced tactical games in one-off battles or across epic narrative campaigns where your fighters grow and develop. This boxed set is perfect whether you're new to the underhive or are a veteran ganger and contains all you need to start gaming. As well as two gangs, the box also contains 17(!) frames of scenery including Zone Mortalis columns, platforms, walls and doors.

Also included is a 128-page softback rulebook containing:
– Background on the rebellions that bubble under the surface of Necromunda and details of the fall of Hive Arcos
– The rules for playing games of Necromunda
– The Uprising Campaign – a complete narrative campaign featuring the desperate decline of a Hive
– Multiple scenarios that capture the feel of a Hive descending into lawlessness
– Rules for creating your own Enforcer Patrol or Corpse Grinder Cult gang
– Rules for all of the weapons and wargear available to gangs and fighters through their House Equipment lists
– Full list of all of the skills available to fighters

Necromunda: Dark Uprising has been added to your cart

This product has been added to your cart

Necromunda: Dark Uprising has been added to your cart

or Checkout
Powered by Lightspeed