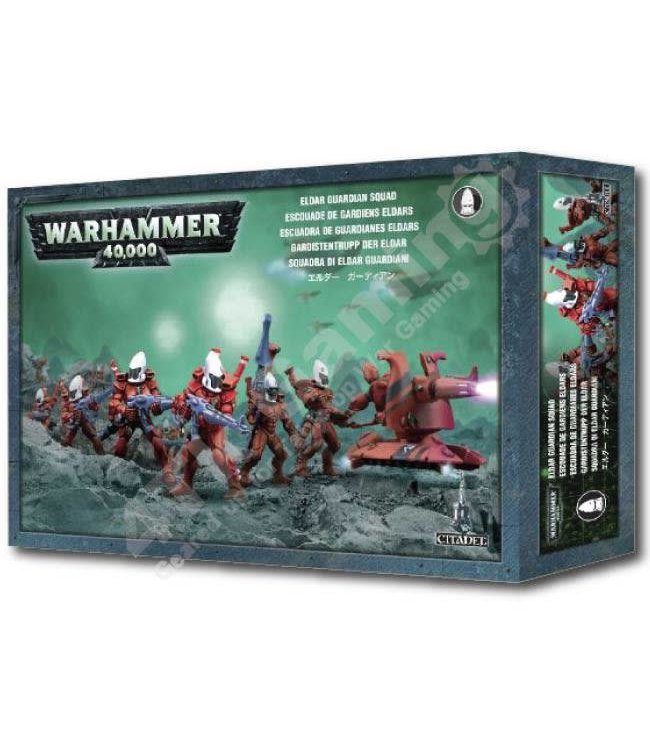 Guardians are primarily a defence force, employed when a craftworld becomes under threat or in battle where the Aspect Warriors are not numerous enough to overcome the enemy. Armed with shuriken catapults and heavy weapon platforms, they can unleash a deadly hail of fire.

This box set contains eight multi-part plastic Aeldari Guardians armed with shuriken catapults, and a heavy weapon platform with two crew members. This set contains all of the parts needed to assemble the heavy weapon platform with either: a bright lance, a missile launcher, a scatter laser, a starcannon or shuriken cannon. Models supplied with ten 25mm round bases and one 40mm round base.

Bursting into reality in a blaze of multicoloured light, the Black Guardians are Craftworld Ulthwé’s sharpest blades. A standing army, extremely skilled and utterly dedicated to the destruction of Chaos, they can strike from the webway, descending from wraithgates and attacking suddenly and with absolute force. After their prey is destroyed, the Black Guardians disappear without trace.


This multi-part plastic kit contains the component necessary to assemble 10 Black Guardians – 8 armed with shuriken catapults, and a 2-man heavy weapons platform, which can be assembled as either a bright lance, a missile launcher, a scatter laser, a starcannon or shuriken cannon. Supplied with 10 Citadel 25mm Round bases and 1 Citadel 40mm Round base.