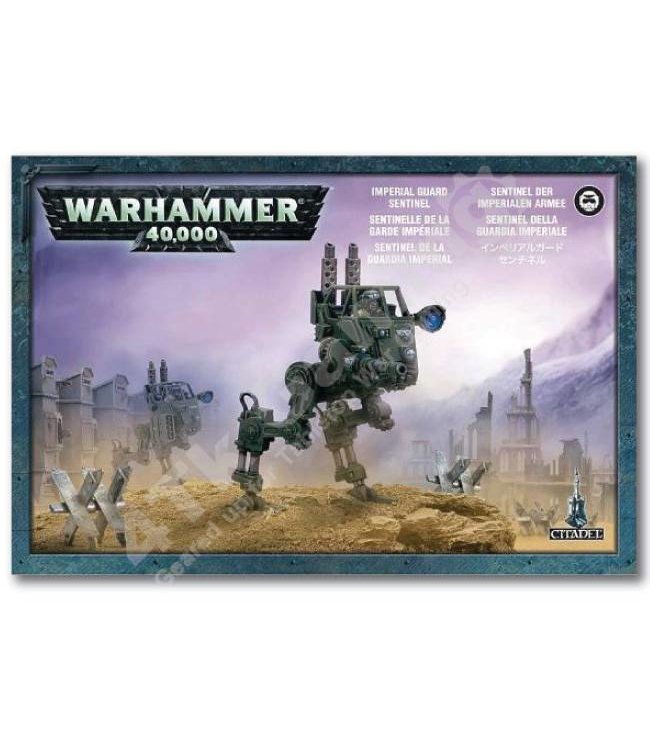 This box set contains one multi-part plastic Sentinel. This 59-piece kit contains all of the components to make either an Armoured or Scout Sentinel, and includes two Cadian and two Catachan pilot heads. Read more..

The Sentinel is a one-man all-terrain bipedal vehicle, used by the Astra Militarum where mobile patrols must be mounted across rough terrain, or where firepower must be deployed rapidly in response to a threat.

This set can be assembled as either a Scout Sentinel or an Armoured Sentinel and features fully-articulated legs, allowing for a wide variety of poses. Included are a choice of weapons – multi-laser, heavy flamer, autocannon, lascannon, plasma cannon and missile launcher as well as other optional accessories including a Sentinel chainsword, searchlight and smoke launchers. It also contains two Cadian and two Catachan heads for the pilot, allowing you to really personalise the model.

The Scout Sentinels emerge from the ruins of a cratered landscape, piston-driven legs hissing. Nimble and fast for walkers of such size, these machines are able to traverse even the most rugged terrain in the hands of a skilled operator. The Neophyte Hybrid pilots of these walkers peer through the gloom with unnatural intensity, refining their targeting solutions and stalking forward with the patience of true hunters until they have the perfect vantage point for launching their mechanised ambush. Suddenly, their trap is sprung in a storm of light and sound, and their unwitting foes fall by the dozen.

This box set contains one multi-part plastic Sentinel. This 59-piece kit contains all of the components to make either an Armoured or Scout Sentinel, and includes two Cadian and two Catachan pilot heads. Also supplied are all of the weapon variants mountable on a Sentinel, including: a multi-laser, a heavy flamer, an autocannon, a lascannon, a plasma cannon and a missile launcher. Model supplied with a Citadel 60mm Round base.

The Sentinel in the image above has been modified with icons from the Genestealer Cults Upgrade Frame, included with the Neophyte Hybrid Squad.

This box set contains one multi-part plastic Sentinel. This 59-piece kit contains all of the compone..