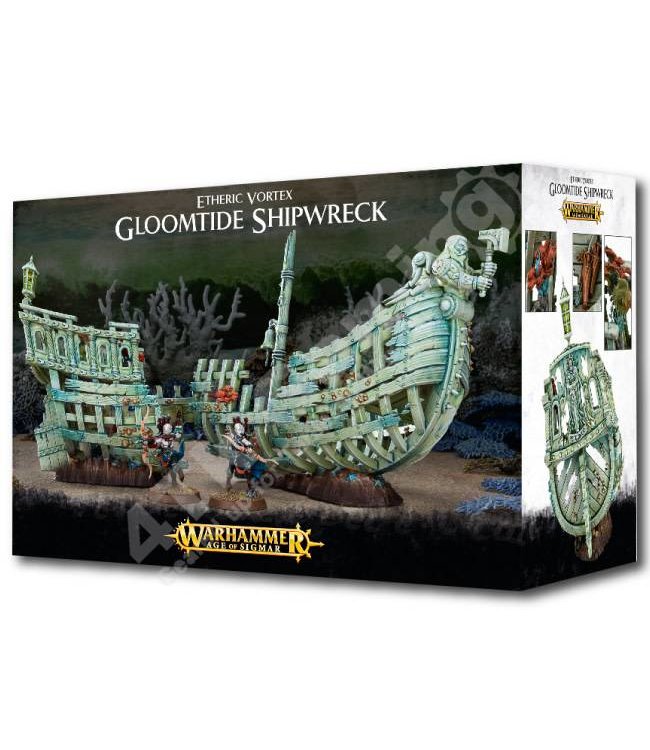 A scenery piece with rules for Idoneth Deepkin armies
Split into 2 halves, which can be pushed together to form a whole
Replete with barnacles and treasure – a truly atmospheric wreck Read more..

When the Idoneth Deepkin go to war, they bring their supernatural sea with them. Ethereal creatures, fish and corals flicker into existence, while features of the seabed manifest themselves eerily on the battlefield. Barnacle-encrusted shipwrecks become havens for aquatic creatures, and shoals of etherfish dart out to protect the Idoneth Deepkin or assail any foes who draw near.

This multi-part plastic kit contains the components necessary to assemble a Gloomtide Shipwreck. This is an Etheric Vortex scenery piece, which models with the Idoneth Deepkin allegiance have access to. The Shipwreck itself is a sea-dessicated hull, the skeleton of some long-forgotten vessel now home to barnacles, coral and creatures sympathetic to the Idoneth. The model is in 2 pieces, which can be placed separately on the battlefield, or together to form one wrecked hull – each section is encrusted with barnacles, littered with bones and trinkets, and feature ship details such as a broken sextant, a ruined rudder, a lantern and a ship’s bell. Alluding to the wreck’s former life, there are plenty of Sigmarite details, with a figurehead holding a hammer, a twin-tailed comet on the mast and a plaque at the rear. Also included are 6 shoals of sea creatures – these can be added to the wreck as you please, though make excellent additions to the base of any Idoneth Deepkin miniature.

A scenery piece with rules for Idoneth Deepkin armies
Split into 2 halves, which can be pushed toge..