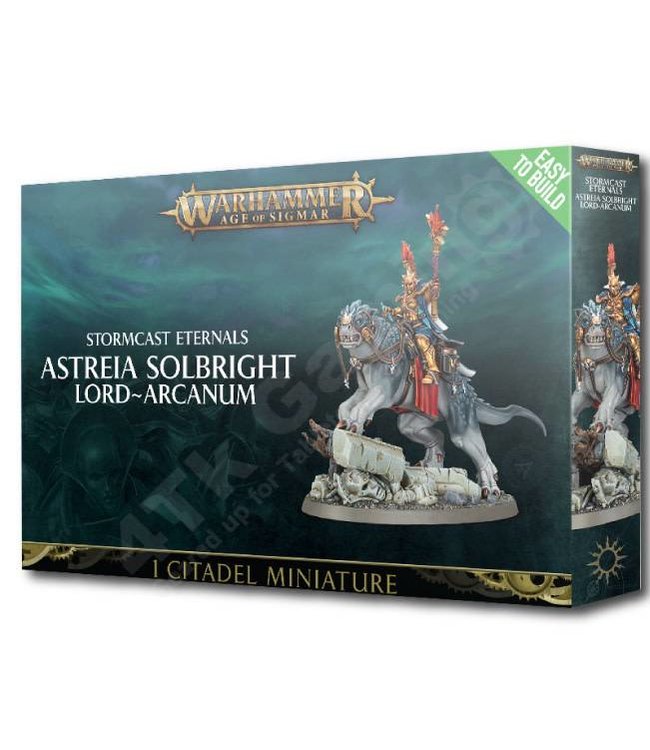 Powerful wielder of the storms, mounted on a fierce Dracoline
Able to summon scorching energies, even as her mount pounces with razor sharp claws
A push-fit miniature on pre-coloured gold plastic – no glue required! Read more..

Masters of aetheric lightning who can manipulate the cerulean energy of Azyr, the leaders of the Sacrosanct Chamber are known as Lord-Arcanums. Their storm-sight allows them to see the souls of living creatures, and they can hurl destructive bolts and empower the warriors around them with but a whispered phrase. A Lord-Arcanum that rides a Celestial Dracoline to war is typically a bombastic and bellicose type. It is just as well, for the Dracoline would soon desert a rider that could not win its favour – or worse, casually disembowel them in a blur of claws.

Designed to be as easy as possible to assemble for new hobbyists while being detailed enough for the hardiest veteran to appreciate, this kit assembles a Lord-Arcanum – Astreia Solbright – mounted on a Celestial Dracoline. Push-fit, with no glue required, this kit is incredibly straightforward to put together and comes on a pre-coloured gold plastic sprue.

Lord-Arcanum Astreia Solbright is a shining example of Stormcast Eternals might. She wears the armour of the the Evocators of the Stormcast Eternals, covered in sigils and signs, with a clasp at the back in the shape of 2 lightning bolts securing her cloak. She carries an aetherstave, with a spirit flask in her left hand; adding to her preparedness for spiritual warfare are a number of accessories – an additional spirit flask, a sword, saddlebags, rolls of parchment and books. Her Dracoline mount, known as Kazra, is stalking prey with feline grace and aggression, its muscular legs ending in four sets of fearsome claws. Its skin is covered in a combination of fur and scales and its harness and reins are emblazoned with the icon of the Sacrosanct Chamber. The Dracoline is posed atop a sculpted base, depicting fallen ruins crushing a Stormcast Eternals statue.

This kit comes as 25 push-fit components, and is supplied with a Stormcast Eternals transfer sheet and a Citadel 90mm Oval base.

Powerful wielder of the storms, mounted on a fierce Dracoline
Able to summon scorching energies, ev..