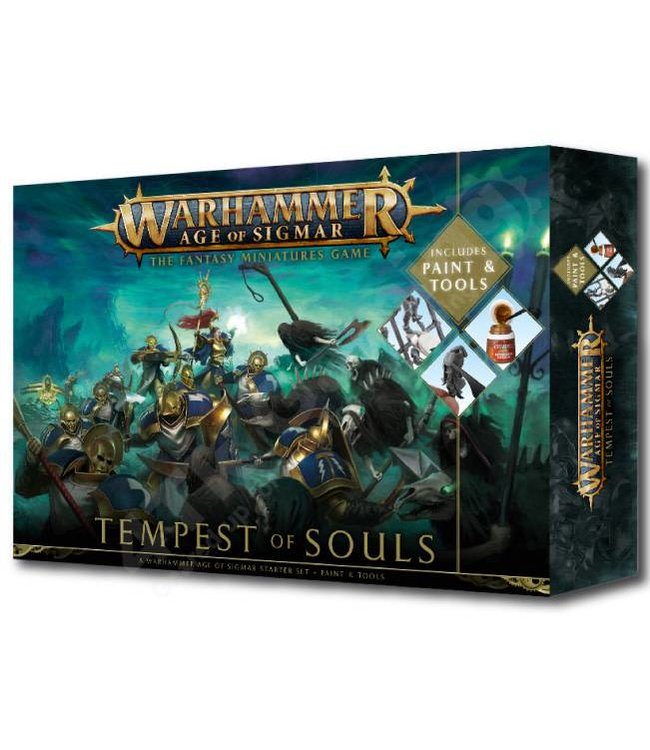 '#' WEBSTORE EXCLUSIVE
This item could take up to 7 working days for delivery and could delay the dispatch of any other item. Read more..

Ancient skeletons and mouldering corpses crawl from their barrows, called forth by the dark sorcery of Nagash, Supreme Lord of the Undead. Ancient beyond reckoning, cruel and infinitely calculating, Nagash seeks to remake the Mortal Realms in his own image, transforming them into an ordered empire of mindless thralls, leashed to his will. In opposition, thunder rolls as the Stormcast Eternals, heavenly champions of order, rage forth to meet this threat head-on in epic clashes to decide the fate of the world, This is a new epoch, a time of mighty battles and unending war, a time of heroes and monsters. This is the Age of Sigmar!

A perfect introduction to Warhammer Age of Sigmar, and the wider hobby of collecting, building, painting and playing with Citadel miniatures, Tempest of Souls & Paint is a starter set packed with miniatures, rules and accessories that will have you up and running in no time. It includes 32 miniatures split across the factions of the heroic Stormcast Eternals and ghastly, undead Nighthaunt – mortal enemies locked in unending combat – and all the tools and paints you need to get them clipped off the frame and painted. Included:

32 push-fit miniatures, which can be assembled without glue and are even supplied on pre-coloured plastic:

The glorious forces of Sigmar, pure and unbowed warriors dedicated to scouring the Mortal Realms of Chaos, Destruction and Death. Each of the 12 Stormcast Eternals miniatures in the box is an Easy to Build push-fit model, supplied on gold plastic sprues and requiring no glue to assemble:

- A Knight-Incantor – a glorious and powerful wizardly leader carrying an incantor’s staff along with a voidstorm scroll
- 2 Evocators – shock-troops who blaze with celestial lightning, armed with tempest blades and stormstaves;
- 3 Castigators – support troops who lay down withering ranged attacks with their thunderhead greatbows;
- 5 Sequitors – frontline infantry who bring the fight to the fore with stormsmite mauls and stormshields;
- A Celestar Ballista – an enormous heavy bolt thrower, serviced by 2 Sacristan Engineers who defend their war machine with sigmarite blades.

Nagash’s seemingly-endless hordes of risen undead, bitter and lethal toward all who still possess the gift of life. Each of the 20 Nighthaunt miniatures in the box is an Easy to Build push-fit model, supplied on turquoise plastic sprues and requiring no glue to assemble:

- A Lord-Executioner – a horrifying gheist whose image is dominated by the macabre gallows lashed to his back, he carries a decapitating greataxe;
- 4 Grimghast Reapers – cursed, indiscriminate killers armed with double-handed slasher scythes – their leader, the Extoller of Shyish, carries a great bell known as the death knell;
- 5 Glaivewraith Stalkers: unstoppable gheists drifting inexorably towards their prey, each attacks with a 2-handed hunter’s glaive;
- A 10-strong Chainrasp Horde: each armed with a malignant weapon – axes, swords, and flails feature heavily here – this frightening force is led by a Dreadwarden, who wields a 3-pronged candelabra.

Containing everything you need to get your Stormcast Eternals and Nighthaunt miniatures clipped from their sprues, cleaned up and painted, this is the perfect set for those new to Warhammer Age of Sigmar. It includes clippers, a mouldline remover, ideal paints for miniatures of both factions and a starter brush:

Our clippers have been specifically designed to clip plastic component parts from the frame. This precision tool is made from stainless steel and has bypass blades which can access even the most awkward parts of the plastic frame, making the clipping process quick and easy.

The mouldline remover tool is used to remove mouldlines from Citadel plastic miniatures. Just draw the tool along the mouldlines to easily scrape them away and prepare your miniatures for undercoating.

Along with these tools, the set includes a starter brush and 13 12ml pots of Citadel paint:

Tempest of Souls features a 16-page set booklet of core rules, providing the basics you need to get gaming. It includes:

- An overview of the items needed to play, how to set up and choose your general, and the basics of measuring distances between models;
- A walkthrough of the turn sequence – casting spells, using abilities, movement, shooting, charging, fighting and testing for battleshock are covered in a concise and easy to follow manner;
- Using Triumphs – these are rewards bestowed upon your army after a major victory;
- Rules covering the use of terrain and scenery in your battles, demonstrating how battles can be radically different in nature depending on the environment;
- A guide to Battleplans – their setup, the rules they employ and the victory conditions they place on your games;
- An explanation of Warscrolls and their use – these contain the rules for your miniatures – and Warscroll Battalions, special formations of certain miniatures that confer extra rewards and abilities;
- Realm of Battle rules – special conditions placed upon the battlefield depending on which Mortal Realm the battle is fought in, which introduce a thematic element to games;
- Allegiance Abilities – these allow your army to use additional abilities and spells, according to their Grand Alliance, faction, and allies.

9 Warscroll cards are included – these cards contain the rules and stats you need in order to field your miniatures, laid out for ease of use in a handy card format. A Warscroll is included for each type of miniature in the box. A further 2 Warscroll cards are in the box detailing the Dreadblade Harrows and Myrmourn Banshees (models not included) – these are a great preview of the next steps in your collection!

Of course, you’ll need guidance in order to play games with your new miniatures – included is a 96-page softback book, packed with background and essential information on painting and playing, including:

- Guides to and explanations of the various types of Citadel brushes – what they’re used for, and how to take care of them;
- Guides to the various techniques used to paint miniatures – undercoating, basecoating, shading, drybrushing, layering and glazing are covered, with explanations of each technique and practical examples showing you their effects on; - Methods for creating evocative bases for your miniatures to stand on;
- An explanation of Technical paints, and their use in creating special effects like blood and rust;
- 6 Battleplans – these are scenarios that feature the included miniatures, with special instructions for setting them up, each re-creating a specific battle from the rich history of the struggle to dominate the Mortal Realms. By combining the core rules booklet with these Battleplans you’ll gradually learn how the Warhammer Age of Sigmar game system works, from basic movement and attacking to controlling objectives and more complex tactics;
- Realms of War – a detailed guide to the Warhammer Age of Sigmar setting, with background on each of the 8 Realms and details of the events that have set in motion the Soul Wars which are blighting each Realm. This includes an explanatory guide to the Stormhosts of the Stormcast Eternals; each of these is its own army with distinct uniforms, tactics and background, as well as the story of the Nighthaunt, the vanguard of Nagash’s horrifyingly large undead army.

Also included are a double-sided playing mat used to fight your battles upon (with the inside of the box even doubling as a scenery piece!), 6 6-sided dice and a 12" range ruler.

'#' WEBSTORE EXCLUSIVE
This item could take up to 7 working days for delivery and could delay the ..