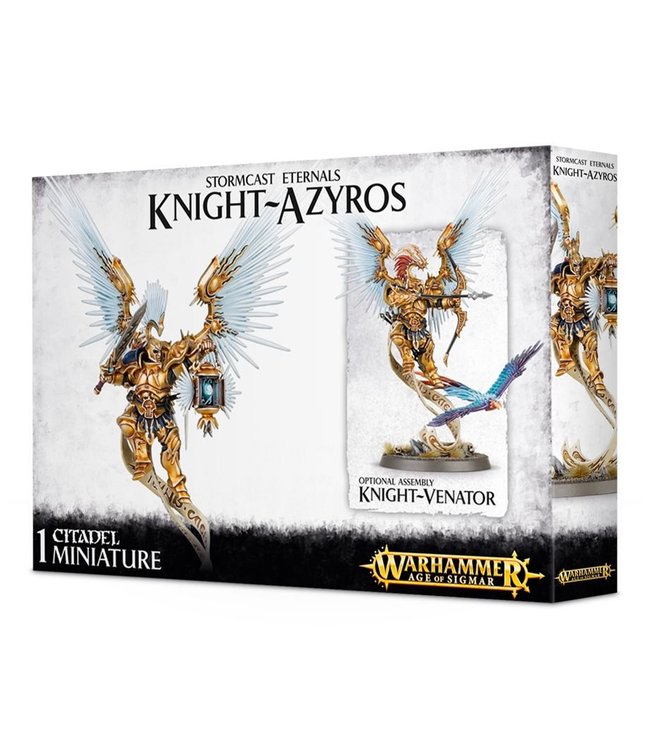 This multi-part plastic kit gives you everything you need in order to build one Knight-Azyros. The kit can also be assembled as a Knight-Venator, and includes a starblade, dagger, lantern, helm and shoulder pads unique to the Azyros. Read more..

The herald of the Stormhosts, an avenging angel clutching a glittering starblade that can carve a swathe through the hardiest of foes, the Knight-Azyros wields another, far more potent weapon. He carries a celestial beacon, a lantern radiating the searing light of the heavens, a light that falls upon the forces of Chaos as a sea of torment far more painful than those twisted agonies the Dark Gods gleefully conceive. Wherever this light shines, so might Sigmar cast his divine bolts more easily - the Knight-Azyros is the tip of the spear, bringing glorious illumination to those places thought lost to infinite corruption.

This multi-part plastic kit gives you everything you need in order to build one Knight-Azyros. Featuring striking, posable wings of light, intricate armour and a domed helm, this miniature is an incredible example of the glory of Sigmar’s Stormhosts. The kit can also be assembled as a Knight-Venator, and includes a starblade, dagger, lantern, helm and shoulder pads unique to the Azyros. Twenty-six components in total, includes one Citadel 50mm Round base.

A fearsome winged hunter, a predator that glides through the skies above the battlefield raining death upon the enemies of Sigmar, the Knight-Venator is a sky-archer of repute. Able to line up and fire entire volleys of projectiles in the time it would take a mortal to nock a single arrow, often the only hint of his presence is a faint, glowing contrail leading to a foe riddled with missiles. Accompanied by a fierce Star-eagle, capable of seeing and rending creatures who exist in ethereal planes, the arrival of a Knight-Venator can singlehandedly change the tide of battle.

This multi-part plastic kit gives you everything needed to build one Knight-Venator, clad in intricate, shining armour and accompanied by a Star-eagle; with a unique shoulder pad, realmhunter’s bow, storm gladius, quiver and eagle helm. This kit can also be optionally assembled as a glorious Knight Azyros - twenty-six components are included in total, with one Citadel 50mm Round base.

This multi-part plastic kit gives you everything you need in order to build one Knight-Azyros. The ..