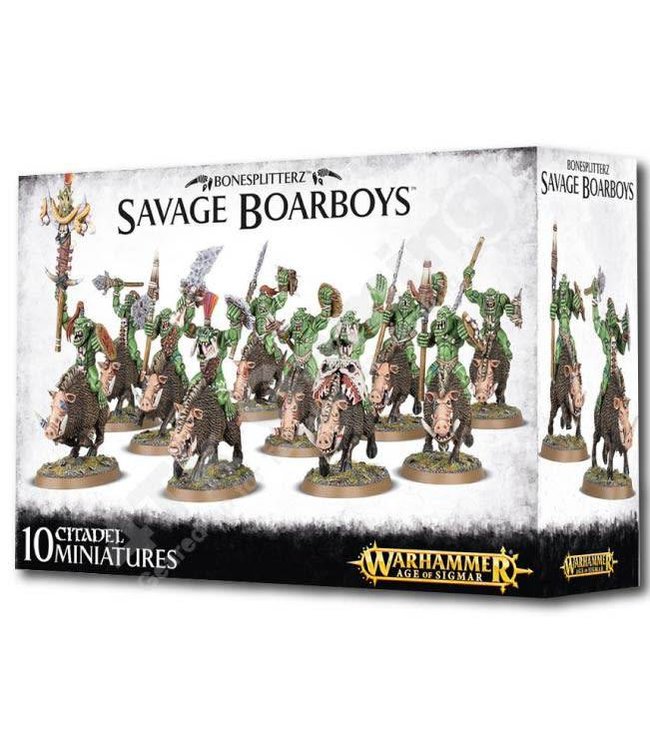 This multi-part plastic kit contains all the components necessary to assemble ten Savage Boarboys, armed with boar stikkas and boneshields or the whole kit can be assembled optionally as Boarboy Maniaks, armed with two chompas. Read more..

This multi-part plastic kit contains all the components necessary to assemble ten Savage Boarboys, armed with boar stikkas and boneshields. Included are options for a Boss, Boar Thumpers and a Boar Totem, and the whole kit can be assembled optionally as Boarboy Maniaks, armed with two chompas.

Sharing a bond that goes back to the Age of Myth, Bonesplitterz and war boars can often be found barrelling into the ranks of the foe at high speed, eager to be the first amongst them to spill blood. Specialising in hit-and-run attacks, they never linger where the enemy can strike back – speed is of the essence. Their boars are fed on the bones of the most powerful beasts the Bonesplitterz can slay, although of course there is rather a lot of bickering and competition amongst their orruk riders over which monsters’ bones make for the most brutal mounts.

Quite mad, scorning such cowardly vices as armour, shields and basic self-preservation, Boarboy Maniaks ride into battle waving vicious chompas in each hand – all the better to enact as much carnage as possible. Their mounts are just as mad as they are, specially chosen for their ill tempers, which are made even worse by the Boarboy Maniak bouncing about atop them, driving spurs of sharpened bone into their flanks. These unhinged orruks will even trample their own kind in their efforts to be the first into the fray, swarming over a stunned foe in a crazed display of teeth, tusks and madness.

This multi-part plastic kit contains all the components necessary to assemble ten Savage Boarboys, a..