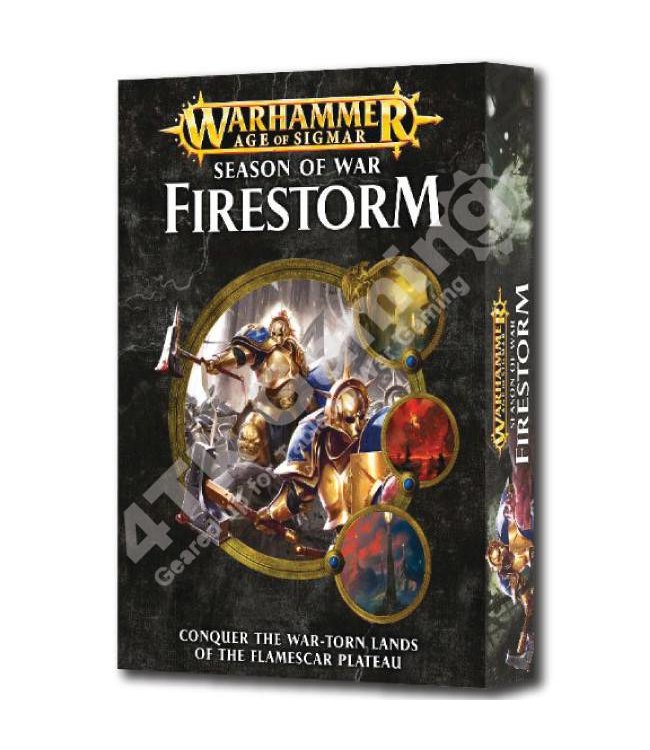 For millennia armies have battled for control of the region known as the Flamescar Plateau, seeking to unearth its priceless treasures and hidden relics. Here lies a weapon of supreme destructive power, sought by armies from across the Mortal Realms. Whoe Read more..

This box contains everything you need to run a multiplayer campaign of Warhammer Age of Sigmar in the war-torn lands of the Flamescar Plateau. Whether you want to play Skirmish games, or massive, epic battles with thousands of points, this set makes it easy to organise, set up and play. It includes a large map of the Flamescar Plateau, divided into 23 regions for your campaign players to fight over – there are 256 map markers in the box, which are reusable stickers that can be peeled off and attached elsewhere as needed. Emphasis has been placed on speed when designing this box – we want your admin to be as minimal and fast as possible, so you can get on with actually playing through your campaign!

In the included 64-page book, you’ll find a brief history of the Realmgate Wars, along with descriptions of important Sigmarite cities and the Flamescar Plateau itself – the expansive region of the Realm of Fire, once ruled over by a magocracy known as the Agloraxi, over which your campaigns will be fought. It also features an extensive, easy to follow guide to actually running your campaigns – challenging opponents, picking a Battleplan, using Time of War Rules, how to use the included campaign cards, building garrisons and mustering your armies in the regions you control, and some special rules. These special rules add secret objectives allowing players to use some initiative and cunning, rules for trade and negotiation, and possible sudden death victories – these rules can drastically change the flow and outcome of a campaign. There are also 9 sets of Allegiance Abilities for use in the campaign – 6 of these represent the major Sigmarite cities found on the map, with one each for the forces of Death, Destruction and Chaos. These include battle traits, command traits and artefacts of power for your armies to use.

There’s also a set of 131 campaign cards – some of these, the Domain cards, are used to define the size of the armies that are fighting, and provide players with resources to call upon, such as points to spend on re-rolls and Stratagems; the others are used for special rules, and for keeping track of your Glory points – acquire these in order to win! The cards players are using are stored in one of the 4 provided card envelopes, coloured to match the 4 Grand Alliances.

For millennia armies have battled for control of the region known as the Flamescar Plateau, seeking ..