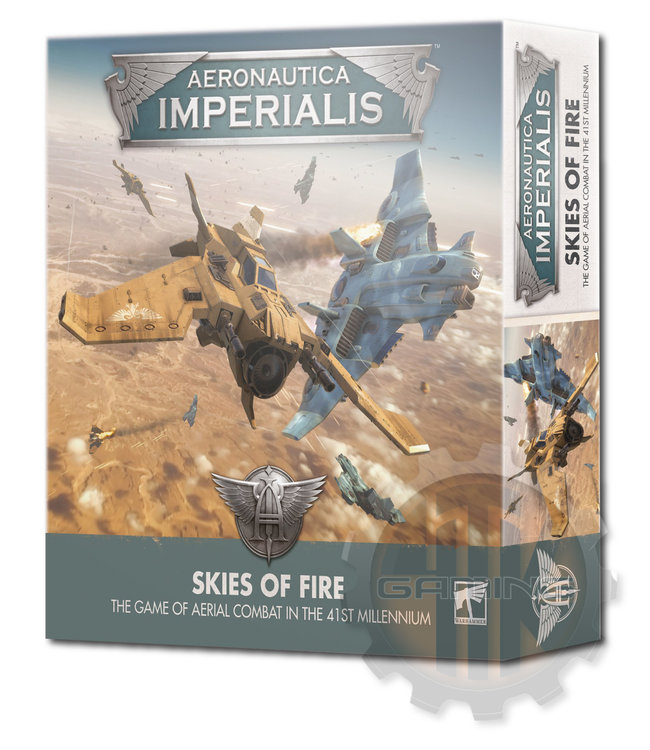 A complete game in a box, including a 36-page rulebook for Aeronautica Imperialis
10 multipart plastic Citadel miniatures from the Imperial Navy, Astra Militarum, and T’au Air Caste
Fight over a double-sided Area of Engagement mat Read more..

The mining world of Taros is embroiled in a bitter, grinding war between the forces of the opportunistic T’au Empire and the jealous and vengeful Imperium of Man. While armies march across the surface of the embattled planet below, the skies are filled with aircraft locked in the dance of deadly dog fights. Will the T’au Air Caste declare air superiority, or will the dogged defense of the Imperial Navy prevail?

Aeronautica Imperialis is a fast-paced game of aerial battles in the 41st Millennium. Skies of Fire contains everything you need to start playing right away, including a combined Imperial Navy and Astra Militarum fleet, and a balanced force of T’au Air Caste aircraft. In addition to the models, you'll get an Aeronautica Imperialis rulebook, dice, counters, a double-sided game mat, and reference guides to get you into the action right away.

Split Skies of Fire with a friend and play through the narrative Scenarios, or add it to your existing collection to discover new tactical options. The Imperial Navy and Astra Militarum aircraft can be combined with all the existing Imperial Navy kits, including the contents of the Wings of Vengeance boxed set, so even established players will want to grab this box.

The set includes the following Citadel multipart plastic miniatures, each supplied with an Aeronautica Imperialis base and a ball socket stem:

- The full Aeronautica Imperialis game rules, including how to build your force using Squadron Lists, how to perform Ace Manoeuvres and field different classes of aircraft. Learn about manoeuvring your aircraft, adjusting their altitude and changing speed while avoiding the risks of crashing and breaking up. There are even rules for special manoeuvres including landing, taxiing and taking-off.
- The Dogfight scenario, as well as optional rules for fighting at night or in bad weather conditions
- Squadron Lists, providing details of all of the aircraft in the box in addition to their weapon options and special rules
- A reference page showing the eight different manoeuvres aircraft can take, as well as a 2-page quick reference containing the key game rules

A complete game in a box, including a 36-page rulebook for Aeronautica Imperialis
10 multipart plas..