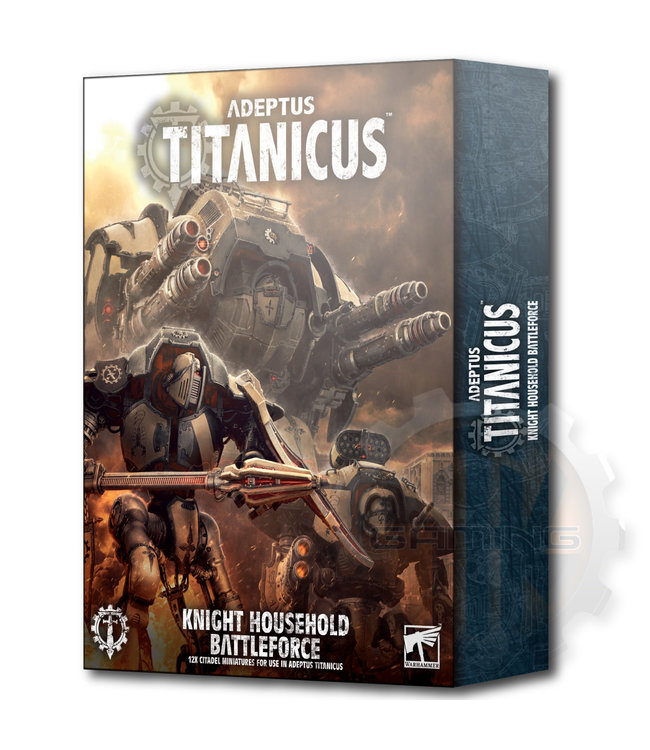 A set of 12 Imperial Knights for Adeptus Titanicus
Start a Household army or add multiple Banners to your Titan Legion
Customise your force with weapons options and variant assemblies Read more..

Knights are the agile war machines of the Knightly houses, each one commanded by a single skilled scion. When the Titan Legions mass for war, they call upon their allied Knightly Houses to aid them. Knights act as scouts and skirmishers for their larger kin. Bristling with fearsome weapons and protected by shimmering shields, Imperial Knights are amongst the most terrifying military assets in the galaxy. When an entire Knight Household marches to war, the various classes of Knight – Questoris, Cerastus and Acastus – march side by side, their noble pilots determined to bring an end to their enemies.

In this set, you will find a collection of 12 Imperial Knights for Adeptus Titanicus. Six Questoris Knights form the core of the force, and are armed with a choice of weapons that can devastate enemy Knights or strip shields from Titans at range before the Knights close for the kill with their melee weaponry.

Alongside them are four Cerastus Knight Lancers. The nobles piloting these war machines eschew ranged weaponry in favour of a devastating shock lance and an ion gauntlet shield that can defend them from the mightiest attack. These fast and agile Knights close quickly on the enemy, deflecting fire from their shields and bringing death to enemies with their lances.

Finally, a pair of Acastus Knights Porphyrion form a defensive bulwark. These Knights are almost as large and well-armoured as a Warhound Titan, and wield paired magna lascannons which can threaten even larger god-machines at range.

Together, these Knights can be added to a Titan Legion to fulfil many different battlefield roles, or form the core of a Knight Household army.

CONTENTS
This boxed set contains everything you need to build twelve plastic Imperial Knights for your games of Adeptus Titanicus. With the 356 components included, you can build the following:

– 6x Questoris Knights with a choice of weapons, including reaper chainsword, thunderstrike gauntlet, thermal cannon, rapid fire battlecannon, avenger gatling cannon & stormspear rocket pod. Also includes multiple meltaguns and heavy stubbers, plus a range of heads to customise your Knights.
– 4x Cerastus Knight Lancers armed with shock lance and ion gauntlet shield, plus a choice of heads.
– 2x Acastus Knights Porphyrion armed with magna lascannons and a choice of Ironstorm missile pods and Karacnos mortar batteries. They have a choice of defensive weapons to sit next to the head, and can be modelled with canopies open or closed.